The Witcher returns to studio shoot 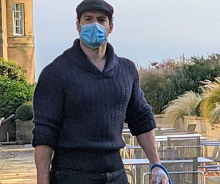 Series 2 of Netflix' The Witcher is returning to its south-east studio base as the lockdown is set to kick in from tomorrow, 5 November.

The fantasy drama had been on location in Yorkshire and other parts of the north of England but, as Henry Cavill confirmed on his Instagram page, is moving production back to the original base of Arborfield Studios in Berkshire, about 40 miles west of London.

Alongside a photo of himself wearing a mask and carrying a bag, and with his dog Kal, the actor wrote: "England returns to Lockdown on Thursday so it is time for me to depart Yorkshire and The extraordinary North, and head back down South to continue shooting in the studio.

"Thank you for hosting all of us on season 2 of The Witcher. Hopefully I shall return to your hills, dales and fells soon. Stay strong and stay safe, my friends."

Filming had got underway on the second series when the first lockdown was implemented in March, then resumed on 17 August after the publication of the Covid safety guidelines that were greenlit by the government, a crucial trigger that saw a swathe of films and high-end TV dramas re-start production.