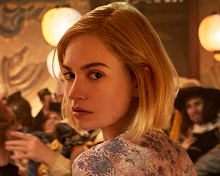 Lily James and Emma Thompson are lined up to star in a new romcom feature, What’s Love Got To Do With It?

Working Title Films is currently in prep on the project, that also stars Shazad Latif and Emma Thompson. Little has been revealed about the plot, but Deadline reported that the story shifts between London and South Asia and is a cross-cultural comedy about love and marriage.

Shekhar Kapur directs from a screenplay by Jemima Khan; the film marks Kapur’s first feature since Elizabeth: The Golden Age in 2007. Eric Fellner and Tim Bevan produce alongside Khan and Nicky Kentish Barnes.

PI subscribers can log in for more details on What’s Love Got To Do With It, including the shoot dates, casting director and line producer. Non-subscribers can click here to request a free online demo.

Thompson is also on board feature film Good Luck To You, Leo Grande, which is due to begin production in London in Q1 of next year. James recently finished shooting an adaptation of Nancy Mitford’s The Pursuit of Love for BBC One and Amazon which, in late July, became the first major UK-based project to resume filming following the suspension of all production earlier in the year.