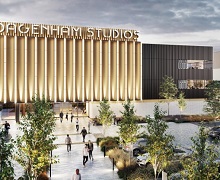 Eastbrook Studios London will be the capital’s largest studio campus. The project comes with planning permission, and HCP’s plans include up to 12 sound stages, three acres of backlot, offices and ancillary space, totalling over half a million square feet.

The studios will create an estimated 1,200 jobs, contributing £35m per year to the local economy and encouraging more development into east London.

The new site will go some way to meet the surge in demand for UK studio space as inward investment in particular continues to make up the majority of the revenue generated by film and TV production in the UK.

The site will be leased to HCP on a 250-year basis.  Building work is set to start next year and filming could start by mid-2022 with the studio fully operational by 2023.

Councillor Darren Rodwell, leader of Barking and Dagenham Council, said: “Today we’re making history.  Dagenham used to be famous for factories and Fords but in the future, we will be equally famous for making films. It’s not for the glamour or glory. It’s about bringing in thousands of jobs, providing education and training opportunities for local young people, and giving people hope in these gloomy Covid times.


“So, I am hugely proud to announce HCP as our partner. They are the right people at the right time. It’s the ‘reel deal’ for our borough, London and the UK.  Movies will be Made in Dagenham.”

Adrian Wootton OBE, chief executive of Film London and the British Film Commission, said: “This investment is fantastic news for the screens sector, for east London and for the UK. It’s a real vote of confidence in our industry’s ability to return to the growth we saw prior to the pandemic and exceed it in coming years.

“With our industry COVID Guidance in place, over 85% of high-end UK productions are safely starting up again, creating the outstanding content audiences are craving. Hackman Capital Partners bring extensive industry expertise of building and running studios around the world and will be a significant additional asset to the UK Film and TV infrastructure ecosystem.

"Today’s announcement is proof that the private investment climate is resilient and bold decisions such as this will further bolster London and the UK’s world-class studio offer, supporting economic growth and creating new jobs.”

Sadiq Khan, Mayor of London said: “This is a very special moment for Dagenham, our capital and all those who have been working hard to realise this bold vision of bringing new world-class film studios to East London. It is a very significant investment and boost to our economy that will create 1,200 jobs, inspire further development and creative opportunities, and secure our position as a global capital for film and TV.

“We are already seeing that the success of this industry will help our economy to recover from the impact of the pandemic, and these studios will play a key role in our city’s future.”

At Steeldeck we like to work hand-in-hand with you, giving you the attention and flexibility you need to make your staging or seating project a… more Call: 020 7833 2031   |   Add to Shortlist