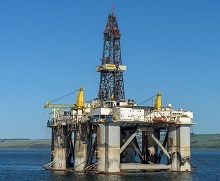 Major new drama series The Rig will be the first Amazon Original series filmed exclusively in Scotland, on an oil rig and at FirstStage Studios, the new Scottish film and TV studio space in Edinburgh.

The supernatural thriller follows a group of workers on the Kishorn Bravo, a remote oil rig stationed off the Scottish coast in the dangerous waters of the North Sea. The cohort is due to return to the mainland when an eerie fog descends, and a mysterious force begins to take hold.

Created by David Macpherson, directed by John Strickland, the six-part series will be produced by Wild Mercury Productions.

The series marks Macpherson’s first-time commission. Joining him on the writing team are Meg Salter and Matthew Jacobs Morgan.

Wax said; “The Rig is a character-driven, epic thriller, full of heart-grabbing action and bold, original ideas, and we are delighted to be working with Amazon Prime Video in bringing it to life.  David Macpherson captures life on a North Sea oil rig with extraordinary authenticity and it’s been exciting to work with him, director John Strickland and our creative team in realising the scale and vision of this world. “

“The Rig is a brilliant story, expertly told, in the most dramatic of settings” added Georgia Brown, director of European Amazon Originals for Prime Video. “It asks searching questions about nature and the environment, about what it takes to survive and to be human, which feels very pertinent to the world we are living in now…”