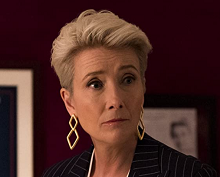 Emma Thompson is lined up to star in a new British film called Good Luck To You, Leo Grande, directed by Sophie Hyde.

Hyde will call the shots from a screenplay by comedian Katy Brand.

he film centres on Nancy Stokes (Thompson), a widow who yearns for some fresh adventure and good sex. In pursuit of her desire, she hires Leo Grande, a twenty-something sex worker, for one night.

It will be the third feature directed by Australian filmmaker Hyde, whose Animals debuted at the Sundance Film Festival in 2019, while 52 Tuesdays won a directing award at Sundance in 2014 and a Crystal Bear at the Berlinale.

Debbie Gray of Genesius Pictures will produce Good Luck To You, Leo Grande; shooting is scheduled for early 2021 in London. Gray’s previous credits include Mrs Lowry And Son and Northern Soul.