Guilt to film in Scotland next month 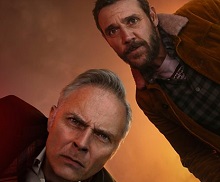 The second series of Guilt is set to begin filming in Scotland next month.

Expectation and Happy Tramp North produce the drama; it will shoot largely around Edinburgh and Glasgow for 10 weeks.

The first run, also delivered as a run of 4 x 60 by writer Neil Forsyth, starred Mark Bonnar and Jamie Sives as two disparate brothers, united by guilt when they accidentally run over and kill an old man on a darkened street.

The first series starred Mark Bonnar and Jamie Sives as two disparate brothers, united by guilt when they accidentally run over and kill an old man on a darkened street. Other cast included Emun Elliot, Bill Paterson, Sian Brooke, Ruth Bradley and Ellie Haddington. Casting for series two will be announced in the coming months.

Patrick Holland, controller, BBC Two, said: “Neil Forsyth’s Guilt was a dark gem in last year’s schedules and I am delighted that the team is returning for a new series. It was a real treat to have Neil’s sharp writing and the wonderful performances, weaving a brilliant tale of lies, deception and skulduggery. Audiences across the UK await series two with relish.”

Steve Carson, head of multi-platform commissioning, BBC Scotland, added: “Guilt was, without a doubt, one of the highlights of our year on BBC Scotland and we’re thrilled to bring it back for a second series. Neil Forsyth’s ability to marry comedy and drama together and the brilliant cast that brought his scripts to life made for compelling viewing and made Guilt a must-see moment on TV and BBC iPlayer.”