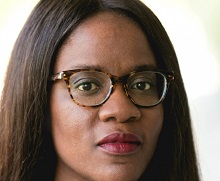 The series centres on Stephen Richards, a successful businessman who always gets his own way. After 20 years of success, Stephen’s at the helm of his multi-million pound cosmetics empire and is reaping the rewards of his business acumen and ambitions.

He's a great advocate for black-owned business, powerful, driven and impassioned, and with a glamourous, younger second wife, Claudia, life is never dull. Along with their adult children, Alesha, Gus and Wanda they love spending their hard-earned cash.

When Stephen suffers a stroke, the family’s world comes tumbling down. As Stephen's life hangs in the balance, his children are about to collide and with secrets and lies rising to the surface and the empire at stake, it's bound to be a complicated family reunion...

Riches will begin filming in London and New York during the early part of 2021. The series will be produced by Greenacre Films (Been So Long), an independent production company founded by award winning producers Nadine Marsh-Edwards and Amanda Jenks.

The pair said of the project: "It's fantastic to be back working with Polly and ITV on this compelling and nuanced series and to be working with the incredibly talented Abby Ajayi to bring the Richards to screen is an absolute joy. We think that it's going to be a lot of fun and can't wait to bring such an entertaining and brilliant family into people’s homes."

Ajayi, pictured, whose recent credits include the TV reboot of Four Weddings and a Funeral and How to Get Away with Murder, commented: “The brash, complicated and indefatigable Richards family are a joy to write and I am thrilled that this contemporary story about a Black British family and their ambitions has found a home at ITV with its enviable track record of popular dramas. I'm delighted to be working with Nadine Marsh-Edwards and Amanda Jenks who have long proven their commitment to entertaining, inclusive storytelling.”