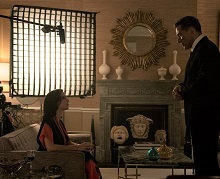 252 productions were issued with permits including high-end TV dramas Industry, The Spanish Princess 2, His Dark Materials S2, The One, The Pale Horse and The Salisbury Poisonings.

Councillor Craig Cheney, deputy mayor and cabinet member for finance, governance and performance, said: “Bristol’s strength as a city with a thriving creative sector and collaborative spirit is well known and our culture of talent and innovation continues to continually attract new investment and projects as well as helping to secure jobs.


“This year is likely to prove more challenging as film and television partners deal with the implications of Covid-19, the lockdown and further restrictions. The arts and culture sector and those who work within it have been hit hard and we support those calls for more central government support to be made available for this area.


“However, we remain confident that the expertise and commitment shown by our Film Office and Studio teams will ensure that Bristol remains a magnet for important productions as the industry as a whole sets out on the road to recovery.’’


Senior Bristol film manager Laura Aviles added: “These figures show what excellent shape Bristol’s film & TV production was in last year, with £17million generated by productions using our studios, locations and freelance crew. It’s inevitable that the 2020-21 figures will read rather differently; the pause in filming caused by lockdown in March will have had an impact on this sector like every other.

“I’m pleased to say though that our recovery has been relatively fast, in fact Bristol has been the location of choice for some of the first high end TV productions to resume filming in the UK, such as Pursuit of Love and season two of War of the Worlds, which were up and running again by late July/early August.


"That’s very much down to the speed at which local crew and companies have adapted to new safety measures and the resourcefulness of the Studios and Film Office teams. With new filming enquiries coming in every day, we’re confident that Bristol will be very busy for the rest of this year and into 2021.”