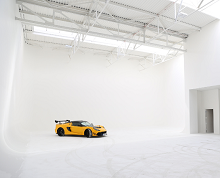 The site comprises four studios, each with white CYCs, drive-in access, production office, hair and make-up station and a green room. There is also an anti-Covid purification system in place.

The space is available to rent from this month. A team from Pixipixel, a camera and lighting equipment rental house, helped with the design and build of the studios in terms of plans, studio layouts, power etc, and will have an onsite store at The Tank Factory.

The studios have been built in what was previously a military tank factory during the Second World War, thus providing large square footage for an urban facility.

Studio founder David Hardwick said: “I am pleased with the work we have done in the past few months. Despite some delays and hitches that have arisen due to the pandemic, to see how the space turned out is fantastic. It’s a great new location for TV, commercials and photography”.

Studio space in the UK is increasingly in demand. Several purpose-built sites are set to open in the coming months and a handful of existing facilities are undergoing extensive expansion work.