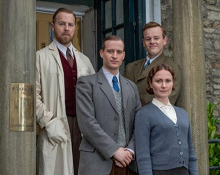 During 2019, 44 out of 111 (40%) independent production companies that received commissions from Channel 5 were regional.

In particular, Channel 5 has invested heavily in Yorkshire-based programming, totalling £20m from 2015 until the end of 2019. The Leeds-based independent production company Daisybeck is behind a number of Channel 5 commissions, including The Yorkshire Vet and Springtime on the Farm. In addition, the channel’s new drama, All Creatures Great and Small, produced by Playground, also received investment from Screen Yorkshire’s Yorkshire Content Fund.

Ben Frow, director of programmes, ViacomCBS Networks UK commented “Channel 5 looks beyond the metropolitan London bubble when it comes to programme-making, which in turn helps us to reflect audiences the length and breadth of the country.

“This approach is resonating with viewers, as the channel’s top four regions for share of viewing are all outside the M25, with London fifth. I am proud that we go above and beyond our PSB remit and that we are such strong supporters of the UK creative economy.”

Location Partnership is a location agency representing a vast array of exciting properties available for film, television, commercials and photoshoots. Our extensive portfolio of shoot… more Call: 020 7734 0456   |   Add to Shortlist