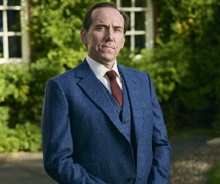 The six-parter stars Ben Miller, Frances de la Tour, Emma Naomi and Barney White and is from newly-formed production company, Eagle Eye Drama, launched by the same team behind global drama brand Walter Presents. It is based on the Belgian series of the same name.

Miller said of the project: “Professor T has it all: intriguing murders, dreaming spires, and a cast of unforgettable characters, each with their own fascinating secrets. You don’t have to be a professor of criminal psychology to know the ITV audience will love it.”

The series is supported by Screen Flanders and the Belgian tax shelter.

Iuzzolino commented: “Professor T is my all-time favourite detective – a tortured genius wrestling with a mystery childhood trauma. It’s a unique crime series with a core of wonderful warm characters at its heart and I am delighted to be working with our hand-picked European production team to make this for ITV and international audiences.”