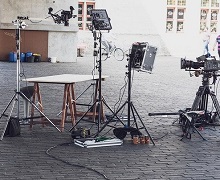 The new fund, established with donations from Amazon Prime Video, BAFTA, BBC, BBC Studios, Sony Pictures Entertainment and ViacomCBS, will seek to protect the industry’s diverse talent pipeline by focusing on supporting those at greatest personal and professional risk as a result of the pandemic.

Recent research commissioned by the charity has warned of the disproportionate effect of the pandemic on some groups, especially those who may already face barriers to staying in the industry, including Black, Asian and minority ethnic workers, women, those living outside of London, and people with a disability.

The scheme will deliver a targeted financial and wellbeing support that will enable people to support themselves for up to six months.

The new grant scheme is the latest in a tranche of measures forming the Film and TV Charity’s Covid-19 Response, which was kickstarted with an Emergency Relief Fund in March.

To date the charity has raised more than £5.8m of ringfenced funding, launched a range of mental wellbeing services and provided critical ancillary services including financial guidance.

The charity needs to raise a further £900,000 to meet the costs of the Covid-19 Response and is inviting further donations to maximise the number of people the new fund will support.

Alex Pumfrey, CEO of the Film and TV Charity said: “We know that diverse talent – including women, those who are Black Asian or minority ethnic, and those who are disabled – are now being disproportionately impacted by the crisis due to a range of factors. So we have a real concern that without urgent support we will lose these people from our industry.

“We’re incredibly grateful for the generous support of Amazon Prime Video, many BAFTA Members, BBC Studios, Sky Studios, Sony and ViacomCBS, as well as the generous individuals and enthusiastic efforts of people in the industry who have made this possible.


"We have a real opportunity to take action to support workers in greatest need now in order to protect the diversity of our industry for the future and I hope that others will seize this moment to donate to our Covid-19 Response.”

“We know this help is much-needed right now as the UK creative industry rebuilds and productions tentatively re-start across the country, so we’re delighted to be supporting the Film and TV Charity in their continued efforts to attract more donations so that even more members of our creative community, especially those who’ve been disproportionately affected, can be supported.”