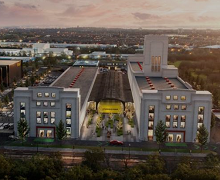 Liverpool’s ambition to create the city’s first pop-up studio is progressing with the official submission of a planning application.

Liverpool City Council’s proposal is for two 20,000 sq ft studios on land adjacent to the iconic Littlewoods Building, its currently the focus of a major development project to become a key filming facility for the region.

If the application for the pop-up site is successful, the work on it should start in a couple of months with the two sound stages operational by spring 2021.


In July this year, the Liverpool City Region Combined Authority approved £17m to support the new film and TV stages, along with the Littlewoods Film and TV studios. The latter has signed up Twickenham Studios as its anchor tenants.

A report will also be submitted to the council’s Cabinet next month seeking approval to appoint contractors to construct the facilities.

Liverpool has a long-held reputation as a film-friendly city, with a recently-launched production fund administered by the Liverpool Film Office. The city often doubles for other world locales, partly due to its grand civic architecture, such as ‘playing’ New York in Das Boot, Madrid in Years and Years, London in The Irregulars and Wales in The Snow Spider.

As a result, £17.6 million has been brought in to the local economy during that time frame – an increase of £1.5m on last year.

Joe Anderson, Mayor of Liverpool, said: “Liverpool’s reputation in the TV and film industry is second to none. The city’s ability to double up as New York, Chicago or Moscow means we regularly see it on the silver and small screen. Being a world class location has opened many doors and the demand from production companies to come here has now reached a tipping point where we need to take the city’s offer to the next level.

“These two pop-up sound stages adjacent to the future Littlewoods Film Studios will ensure co-location to the best new facilities in the UK and transform Liverpool’s ability to provide the TV and Film industry with a more all-round package, enabling us to attract a more diverse range of productions which will in turn will create more jobs.

Following the recent news that Hackman Capital Partners (HCP) has invested in building Eastbrook Studios, the global real estate and operating company has now confirmed it is funding a second filming facility, also in the borough of Barking and Dagenham.