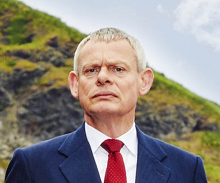 The show was created by Dominic Minghella and first aired in 2004, starring Martin Clunes as the irascible and hemophobic local GP.


Set in the fictional town of Portwenn, the drama is filmed in Port Isaac, and draws a steady amount of ‘film tourism’ after the airing of each series.

It has achieved regular ratings success, and has been remade in several countries, including France, Germany, Spain and Greece.


The final series will shoot in spring 2021. It is made by Buffalo Pictures, owned by Clunes and his wife Philippa Braithwaite, who produces the drama. They said of the news:


“We have loved making nine series of Doc Martin.  When we launched the series in 2004 we could never have imagined how much our loyal viewers would take to the grumpy Doc like they have.  The series has avid fans both in the UK and throughout the world and we are thrilled that Doc Martin has topped the ratings every time.

However, after sixteen years we now feel that the time has come to say goodbye to Portwenn.  We will be making the tenth and final series in 2021 and we are very much looking forward to returning to Cornwall to film it.”