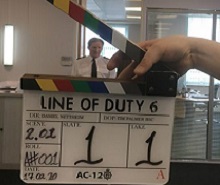 
The sixth series of Jed Mercurio’s Line of Duty picks up filming at its usual home in Belfast, with 12 weeks left to shoot of the original schedule; it originally began production in mid-February.

Set 18 months on from the events of Series 5, the new run stars Kelly Macdonald as DCI Joanne Davidson, a senior investigating officer on an unsolved murder case.

World has also just resumed filming near Glasgow on Vigil, its new thriller starring Suranne Jones about the disappearance of a Scottish fishing trawler and a death on-board a Trident nuclear submarine.

Cameras will also start to roll on Monday on Sex Education, from writer Laurie Nunn and Eleven Film. The series is filmed on the Welsh borders, around the picturesque Symonds Yat in the Wye Valley, and stars Gillian Anderson and Asa Butterfield. The show was originally due to begin in the early summer.

Also due to be back up and running around now are the second series of Temple starring Mark Strong and the third series of Britannia.

Productions scrambled to get back up and running around the UK once the government confirmed the insurance backstop in late July. The £500m scheme is estimated to cover around 70% of domestic projects against future disruption caused by Covid.

The first major scripted drama to get cameras rolling after the lockdown was the BBC’s adaptation of Nancy Mitford’s novel The Pursuit of Love, which began shooting around Bristol and Bath in the last week of July.

Antonio’s TV and Film Catering- Global Location caterers of distinction. Together, Front of house Antony Zuri and Head Chef Ian Kluth have been in the… more Call: 07500 276560   |   Add to Shortlist

CGI Catering can provide a Covid 19 compliant kitchen. As a family run business our 6 core staff have been in isolation together since the… more Call: 01883 338701   |   Add to Shortlist

We specialise in coffee and craft services for the Film & TV industry. Operating nationwide, we work on all types of productions, from Hollywood motion… more Call: 07710 151219   |   Add to Shortlist

We caffeinate your cast & crew, with our freshly ground coffee, from Union Hand Roasted, served from either our quirky little coffee van or into… more Call: 07850 455136   |   Add to Shortlist

Peckish catering services are a young and vibrant catering company based out of Essex. Specialising in location catering for the TV and Film industry, Peckish… more Call: 07530 665969   |   Add to Shortlist

Green Tea Live is an experienced and highly motivated catering team, specializing in location catering. The team have racked up over 10 years in the industry delighting world… more Call: 07872 451693   |   Add to Shortlist