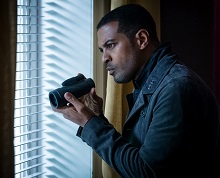 Viewpoint, a new ITV drama starring Noel Clarke, is now filming in Manchester at Space Studios and in various locations across the city - the first ITV drama to resume filming since the lockdown suspended production in the spring.

From Tiger Aspect in association with Clarke’s shingle Unstoppable Film and Television, the show is based on an idea by director Harry Bradbeer and is co-created and written by Ed Whitmore.

The five-part drama follows a tense police surveillance investigation into a tight-knit Manchester community and explores whether it is ever possible to observe the lives of others with true objectivity and zero effect. Clarke stars alongside Alexandra Roach, Amy Wren and Fehinti Balogun.

Head of drama, Tiger Aspect Productions and executive producer, Lucy Bedford said: “Harry and Ed have crafted a compelling, tense, claustrophobic thriller that turns the spotlight on the observer rather than the observed.  With the incredible Noel Clarke and Alexandra Roach leading the cast, we are extremely excited to be back in production.”