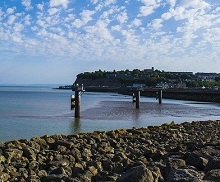 A new Sky Original starring Dawn French begins a month-long shoot in Wales today, both on location and at Seren Studios, formerly known as Pinewood Wales.

The feature-length single drama is written by Abi Wilson and narrated by John Hannah with music by Murray Gold. Sherlock and Dracula producers Hartswood Films is behind the production, which blends live-action camera work, stop-frame animation and puppetry. It is directed by David Kerr and supported by Screen Wales.

Elaine Cameron, producer, Hartswood Films, said: “This film follows a joyous and magical journey involving two of Britain’s most loved children’s authors. As filmmakers in the middle of a world-wide pandemic, we are similarly embarking on a journey – quite unlike anything any of us have ever experienced.

“The optimism and resilience of the cast and crew and the bravery of Sky to back us to the hilt, is as inspiring to me as a producer as the story itself. We are delighted that Abi’s wonderful writing has attracted such a stunningly funny cast.”