Sister Pictures to make thriller for BBC One 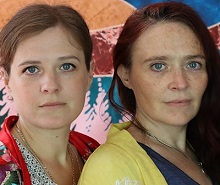 BBC One has commissioned a dark comedy thriller from Sister Pictures and sibling writers Penelope and Ginny Skinner (pictured), called The Following Events Are Based On A Pack Of Lies.

The six-parter tells the story of an unexpected friendship between two very different women and the conman they have in common – a dark and unpredictable thriller about three characters trapped in a triangle.

Penelope and Ginny Skinner said: “In a world where convicted conmen become overnight cultural icons, bypassing blame on their way to fame, we have been inspired to fight back against the glorification of the predator.

“We want to tell a story about the real heroes of any scam: those who risk everything to call out the perpetrators. We are overjoyed to be working with the formidable team at Sister and are delighted the show has found its home at the BBC.”

The Sister team added: “Penny and Ginny’s rageful, joyful, purposeful vision has us gripped and in stitches in equal measure. We share the Skinners’ hope that this show could act as an aide to spotting the differences between the sort of misbehaviour that is to be encouraged and that which needs desperately to be called out.”