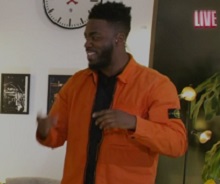 Channel 4 will be marking October’s Black History Month with a round of five documentary commissions, exploring different aspects of the Black experience in modern Britain.

The tranche of films kicks off with Black, British and Funny (w/t), in which Mo Gilligan (pictured) celebrates the Black comedians who paved the way for artists like him and takes a look at the new wave of acts coming up.


Made by Rumpus Media and Momo G, the director is Vanessa Van-Yeboah and the executive producers are Pollyana McGirr, David Geli,  Iain Wimbush and Gilligan.

Black Hair (w/t) tells the story of how hair shapes Black experiences in the UK, while Black Love (w/t) sees prominent Black British couples talk about their relationships and identity through the prism of love.  Made by Pulse Films, the director is Nicole Charles and the executive producer is Nelesh Dhand.

Black Love w/t  (1x60 mins) sees prominent Black British couples talk about their relationships and identity through the prism of love.  The lack of positive depictions of Black relationships has led to the creation of the hashtag #BlackLove showcasing Black couples and positive imagery of Black families. The piece is created by Yomi Adegoke and directed by Adeyemi Michael.

In Is Covid Racist? (w/t) presented by Dr Ronx, questions are asked as to why so many Covid-19 victims are from BAME groups.  Made by STV Studios, the director is John Deol and the exec producer Craig Hunter.

Dr Ronx also presents Are Women The Fitter Sex? which examines women are much better at fighting disease than men. Made by Blink Films, it is produced/directed by Suemay Oram and exec produced by Dan Chambers and Tom Adams.

Danny Horan, head of factual at C4 said;  "I am really excited about the range of programming for Black History Month this year, particularly because we are launching new onscreen talent we hope will become regular faces on Channel 4. This is an important time to reflect, celebrate and consider again what has been achieved and how much more we, as a society and an industry, have to do redress the balance of storytelling, subjects and talent, both on and off screen.”