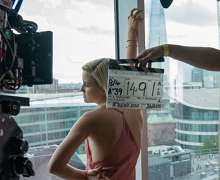 
The 10-part American anthology series – which explores the world of exclusive courtesans who provide their clients with far more than just sex - is inspired by Steven Soderbergh’s 2009 film.


Series three, set against a backdrop of the London tech scene, is written and directed by Anja Marquardt and stars Julia Goldani Telles, who starred as Whitney in The Affair, as young neuroscientist Iris.


The anthology series is a Transactional Pictures of NY LP production in association with Populist Pictures and Magnolia Pictures.

James McAvoy and Claire Foy will lead the cast of My Son, an English-language remake of the French thriller. Filming begins in Scotland in early November.