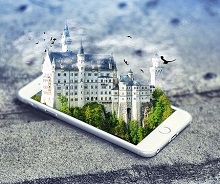 The UK and Canada are teaming up to launch the first co-production programme for immersive storytelling.

The call for UK and Canadian filmmakers, artists and creatives is backed by a £300,000 fund, with the first cohort to launch in November.

The programme is open for applications from now until 17 September and aims to establish collaborations to pioneer new forms of immersive storytelling. They will work with emerging technologies, including VR, AR (augmented reality) and MR (mixed reality).

The year-long programme is supported by StoryFutures Academy (run by the National Film and Television School and Royal Holloway, University of London), Arts Council England, the Canada Media Fund, The Canadian Film Centre’s Media Lab (CFC Media Lab) and the Canada Council for the Arts.

Rebecca Gregory-Clarke, head of immersive, StoryFutures Academy: the National Centre for Immersive Storytelling said: “We are thrilled to launch this programme with such a fantastic group of international partners. It’s crucially important to ensure the UK works internationally and builds cross-cultural collaborations that will benefit both Canada and the UK, enabling us to stay at the forefront of immersive innovation.

"The UK-Canada Immersive Exchange has been created to lower the barrier to entry for exciting creative partnerships across borders.

"We know from our experience at StoryFutures Academy that immersive storytelling projects have brilliant creative visionaries, as well as savvy producers who can adapt their approach to work with partners from all corners of the creative landscape. We can’t wait to convene this wealth of outstanding talent from both countries and see what they create together.”

Francis Runacres, executive director, enterprise and innovation, Arts Council England said: “The lockdowns taking place across the globe have shown the power of technology to create new artistic experiences outside traditional cultural spaces. International collaboration ensures that the best ideas from the worlds of art and technology can be spread as widely as possible, and is essential to driving progress in this emerging field, so we’re delighted to be investing in this programme with our UK and Canadian partners.”