The Syndicate Series 4 gets underway 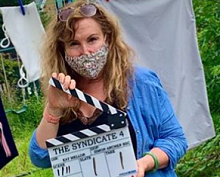 Each standalone series centres on a different syndicate of players, with this run set among a group of colleagues at a kennels who face losing their jobs when the business is sold to a large corporate chain.

Mellor said “Lockdown has been a roller-coaster of emotions for all of us. I was devastated not to be able to begin shooting the new Syndicate. All the scripts were written and we were four days away from principal photography but now we’re ready for the stage and I couldn’t be more excited.

“We’ve got a loyal, star-studded cast and a talented crew, who have waited patiently in the wings. The BBC - Piers Wenger and Gaynor Holmes especially - have been utterly brilliant, supporting us all the way.”

Holmes added: “We are so thrilled to have The Syndicate return to BBC One for a fourth series. Kay has written yet another brilliantly entertaining story and we can’t wait to see the fabulous cast bring it to life.”