Doctors resumes filming for BBC One 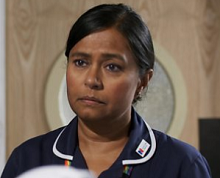 The cast did shoot one special episode in early June, filming themselves from home on their mobile phones.

The team at BBC Studios is adhering to the production protocols in order for filming to resume; the storyline will pick up from where it left off.

Executive producer Mike Hobson said: “It’s been a long process of preparing the set, the crew and actors, to make sure we are working in the safest environment possible. We have been chomping at the bit to get back filming, especially as the audience loved our special Zoom episode.

“We are looking forward to picking up where we left off, and continuing to create great storylines full of humour, while raising awareness of serious issues, and of course, creating a bit of drama!”

Doctors follows Eastenders and Holby City as the third of BBC One’s continuing dramas for the BBC to go back into production.