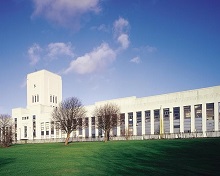 Part of the LCR’s £8.8bn ‘Building Back Better’ economic recovery plan, published last week, the funding comes via the government’s Getting Building Fund, allocated by the Combined Authority.

This initial tranche of £11 million forms part of a package potentially worth an overall £17 million.

Long-term, the development plan for the former Littlewoods Building on Edge Lane will see the iconic structure become a world-class film and TV studio, with Twickenham signed up as anchor tenant. Working in partnership to deliver the project, Liverpool City Council owns the freehold of the building with CAPITAL&CENTRIC owning the long lease.

Part of the funding will be used to open temporary studios to be built on land neighbouring Littlewood and scheduled to be operational by the end of the year.

Liverpool has long enjoyed a film-friendly reputation and is now an established world production hub. 1,750 filming days were recorded in 2019 involving 324 productions including Sky Atlantic’s Tin Star and Netflix UK’s The Irregulars.

Liverpool Film Office, the oldest film office in the UK, is currently administering a £2m production fund to attract more filming in the city region.

Joe Anderson, Mayor of Liverpool, said: “Littlewoods Studios is a hugely exciting regeneration project and this funding will ensure we can deliver the studios for the people of Liverpool. With streaming services like Netflix booming during lockdown, there’s going to be more demand than ever for studio space.

“While Liverpool has a blossoming digital and film industry we want to capitalise on filming opportunities and the economic benefits they bring. Littlewoods Studios is going to change all that, providing Hollywood-standard facilities that will complete our world class offer.

“Now, more than ever, we need to be looking to the future and focusing on major regeneration projects that will deliver highly-skilled jobs and investment for the long term.”

“The Littlewoods project is key and when delivered will be an important part of the region’s economic recovery. This money is hugely welcome and the focus of the film office is to ensure the pop up’s are fully used.

“We know the demand is there and once operational they will support the ongoing development of Littlewoods, providing new job opportunities in a hugely exciting and growing industry.”