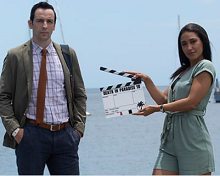 The tenth series of BBC One’s Death in Paradise has begun filming on the French Caribbean island of Guadeloupe.

Production company Red Planet Pictures has liaised with industry bodies as well as incorporating the Guadeloupe advice on Covid-19 safety protocols, with testing and temperature-taking included in the new on-set precautions. There is also a full-time Covid-19 supervisor.

Red Planet Pictures' joint managing director, Alex Jones, said: “Like every other production company, we have faced huge challenges to get to this point, so we are delighted to be up and running again and extremely grateful to everyone who has helped us get this far, not least the people of Deshaies and the region of Guadeloupe for their assistance.

“The safety of our cast and crew - as well as our friends in Guadeloupe - is the most important thing to us and our policies have been designed to protect everybody whilst still delivering an amazing series for our tenth year.”

Cameras also begin rolling this week on a new BBC adaptation of Nancy Mitford’s The Pursuit of Love, with a three-month shoot underway in and around Bath and Bristol.