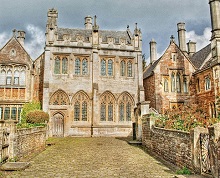 One of the first major UK dramas to get cameras rolling again following the Covid-19 suspension is The Pursuit of Love, Emily Mortimer’s adaptation of Nancy Mitford’s novel. Filming begins today in the West Country.

Moonage Pictures and Open Book Productions are partnering on the BBC One 3 x 60, with Mortimer also in the director’s chair.


Lily James is lined up to star in the mini-series, which is the first in Mitford’s trilogy about the upper-class Radlett family between the wars. Frith Tiplady, Matthew Read and Charles Collier executive produce.


The Pursuit of Love is one of a swathe of high-end TV dramas and feature films that were suspended abruptly when lockdown began in March.

Although insurance is still a major stumbling block, producers are now starting to re-schedule active prep and shoot dates; further details on many of these revised schedules can be found on Production Intelligence.