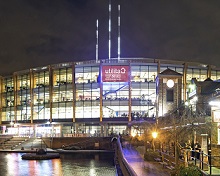 The NEC Group is planning to offer its arenas in Birmingham for film and TV productions, as they lie empty during Covid-19 restrictions.

Both the Utilita Arena Birmingham in the city centre and the Resorts World Arena on the NEC campus will be made available to film and TV productions, with full capacity live events unlikely to take place at the venues this side of Christmas.

“We’ve got a clear diary for both our arenas from now until the end of the year, so we’ve been exploring ways we can utilise our space to get business into the venues, and film and TV production seemed like the perfect fit,” enthused Guy Dunstan, managing director of Arenas, within the NEC Group. “We’re aware there’s a big backlog in schedules for film and TV productions, and a lack of space to support that, as the industry gets back to filming.”

Dunstan and his team have already held discussions with a couple of UK-based film and TV production companies interested in utilising the arenas for filming this autumn.

“We have also been in contact with Film Birmingham (Birmingham City Council’s Film and Television office) to see where further opportunities are available, as they are the go-to organisation for filming in the Birmingham/West Midlands area,” added Dunstan.

Plenty of space and facilities

“These two significant areas can either be used concurrently for filming, or productions can utilise one space for set builds and workshops, and the other for actual filming,” explained Dunstan.

An added bonus is that the arena already offers a suite of dressing rooms, furnished production offices, crew and catering facilities, including a fully-serviced kitchen, staging, as well as an on-site team of rigging and technical experts (sound, lighting, video PAs etc). Plus, ancillary space, such as concourses, suites and hospitality areas.

“A lot of the infrastructure normally found on sets is already in place for film and TV productions, so they don’t need to bring in portacabins and mobile kitchens etc,” explained Dunstan.

It’s a similar story at the Resorts World Arena, which offers 49,000 sq ft of arena floor space, and an annex, known as Forum Live, with 30,500 sq ft of space. There’s also a suite of offices, dressing rooms, and rigging capability and expertise. 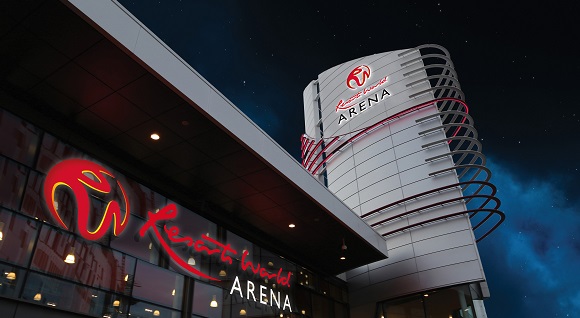 “It’s the same team that run the two arenas,” assures Dunstan. “So that helps in terms of consistency of service, as well as charging and costing mechanisms.”

Access isn’t a problem either, with both sites offering plenty of roof height clearance (Utilita is around 20 metres and the Resorts is 10.8 metres) through their vehicle entry doors, so articulated trucks can get in.

Productions also have the opportunity to use the NEC’s vast exhibition spaces (250,000 sq m of space), which are currently available, and could be used by several different production companies.

Dunstan said they can adapt their facilities to productions of any size or type, whether it’s a big budget Hollywood blockbuster or a small indie project. “In normal times, we can go from an Iron Maiden concert to an Esport event to a major exhibition. We are all about adapting and being flexible,” he insisted.

“We are also used to working on demanding productions. You can imagine some of the artists and the nature of productions we work on can be extremely challenging and complex, but that’s what we’re all about.”

As for location, Birmingham is ideally situated in the centre of the country, only a couple of hours from London, with a great communication and transport network. Also, being a major events city there are lots of ancillary services and businesses that can help productions, such as PRG, who are involved in both music and film and TV production.

The NEC Group has also been very active in preparing their sites for Covid-19 requirements and restrictions, so that business can resume. They have already created a ‘4-step Venue Protect’ approach with health and safety guidelines for forthcoming events.

Dunstan has also written guidance for the National Arenas Association, which has been put forward to the Department for Digital, Culture, Media & Sport, so that the sector can resume work practices safely. This will be reviewed by government. But it can easily be adapted to film and TV productions that take place at the NEC sites.

“It includes how we operate, sanitisation, social distancing, one-way systems, control measures, PPE - every aspect to enable us to get back to business is part of that documentation,” assured Dunstan.

The only issue in the long-term for film and TV productions is scheduling. For now, there is no problem as the sites are not being used. But once live entertainment and events start-up again, booking space will be a lot harder.

“Longer term, hopefully there will be opportunities for film and TV productions to continue, such as in the quieter times like the summer. It is all about forging relationships with organisations and looking at ways of working that perhaps we didn’t have the opportunity or availability to work in before.”

At Steeldeck we like to work hand-in-hand with you, giving you the attention and flexibility you need to make your staging or seating project a… more Call: 020 7833 2031   |   Add to Shortlist