Woodworkers will whittle for C4 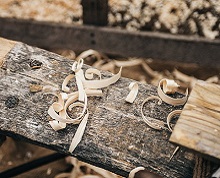 Channel 4 is set to challenge the UK’s most talented woodworkers in a new, six-part factual entertainment series from Plimsoll Productions.

Good With Wood will be presented by Mel Giedroyc and will see a group of woodworkers tasked with a ‘Big Build’, during which the artisans will create large and imaginative wooden structures and objects, in a woodland setting.

Karen Plumb, head of factual entertainment, Plimsoll Productions, said: “In a throwaway world, more and more people are turning to woodwork to connect them to nature and their creativity. We’re delighted to be making this escapist and ambitious competition for Channel 4.”

“So, if you go down to the woods today, you’re in for a big surprise. Good With Wood is going to be something we can all lean on. I can’t wait to make like Edward Woodward and get WOODSWARD.”

Good With Wood is produced by Plimsoll Productions, from its Cardiff office, and the executive producers are Grant Mansfield and Karen Plumb.