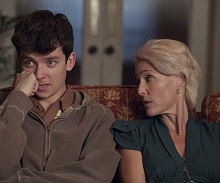 Founded in 2006 by Jamie Campbell and Joel Wilson, Eleven became the first drama company to benefit from Channel 4’s Growth Fund, which has comes to an end under the new SPT deal.

The company’s credits include Glue, The Enfield Haunting and Gap Year. The team is due to begin filming soon on the third series of Laurie Nunn’s Sex Education and is in development on White Stork, a political thriller for Netflix written by Christopher Dunlop and starring Tom Hiddleston. Eleven is also working on Red Rose, a young adult horror story for the BBC.

Alex Mahon, Chief Executive, Channel 4 said: “Eleven was the first drama producer to join our Indie Growth Fund family in 2014 and it’s been a real pleasure to see how the company has evolved into a premium global drama player. I wish Jamie and Joel and everyone at Eleven every success for the future as they embark on the next stage of their journey with Sony.”

Eleven’s Jamie Campbell and Joel Wilson added: “Joining Wayne, Richard and the rest of Sony’s extraordinary team in the US and UK is a hugely exciting step for us. We are deeply proud of the world-class slate of scripted shows we have in development; and no one in the world is better positioned than Sony to help us convert it.”