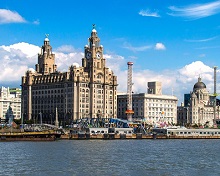 Liverpool city region has published an economic recovery plan, urging the government to invest in getting the area back on its feet following the Covid-19 pandemic.

As part of the £1.4bn scheme, there is a call for a temporary film studio to be built, for use over the next three years until the ongoing conversion of the Littlewoods Pools building is complete and running at full capacity.

The proposal is for a pop-up studio to be constructed on vacant, city-owned land, comprising two 20,000 sg ft sound stages.

Liverpool is a major international filming hub, with grand historic civic buildings that easily double for those of other cities. The Liverpool Film Office is more than 30 years old and administers the Liverpool City Region Production Fund. Recent high-end productions to have filmed there include The Crown, BBC One’s The War of the Worlds and The Snow Spider.

Mayor of Liverpool Joe Anderson said: “The Covid-19 lockdown has left cities like Liverpool in a state of economic paralysis and the option of doing two things – wait for events to unfold or take action. Liverpool has acted. This recovery plan is a blueprint for a new Liverpool.

“Forged by ambition and confidence to be innovative in how we create new skills, new homes and new jobs, and it has the weight of the entire city behind it.

“Liverpool has undergone a renaissance over the past two decades and we are not about to let the momentum slip.”