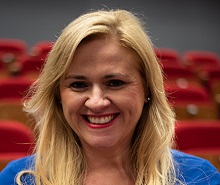 Professor Lyndsay Duthie has been announced as the new CEO of the Production Guild of Great Britain (PGGB).

Duthie will take up her role in August; previous CEO Alison Small stepped down in March to become UK production training manager at Netflix.

The PGGB has more than 1000 members across the UK and has been working closely with the British Film Commission on its industry-wide consultation that formed the recently-published report about how production can resume safely.

PGGB chair Alex Boden said of the hire: “… Lyndsay will pick up the reins at a crucial time as together the industry rises to the challenge of restarting production. I have no doubt she’ll do a fantastic job of ensuring PGGB continues its strong track record of support for those behind the camera, especially as we respond to the realities of the production workplace post Covid-19.”

Duthie commented: “I am thrilled to be joining The Production Guild as CEO, particularly at this incredibly important moment in film and television history as we reimagine the production landscape.

"By nature as production professionals we are problem solvers, so I know that we will find innovative ways together to future-proof our industry and continue the success of British film and television production. I very much look forward to the challenge ahead.”

Duthie’s background in media includes more than 10 years at ITV, from where she moved to Endemol before founding Ice Blue Media.

Since 2018 she has been head of school for film, media and performing arts and head of Farnham Campus at University for the Creative Arts.

Duthie has served on the board of directors for WFTV and judged at the Royal Television Society Awards, International Emmys and BAFTAs.