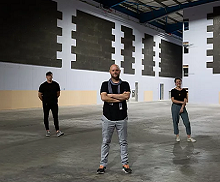 As production in the UK begins to rumble back into life, a major new film studio – London’s largest - is opening its doors to feature film and high-end TV drama.

OMA Film Studios in Enfield comprises four sound stages totalling around 90,000 sq ft, with an overall site space of 139,000 sq ft. It is estimated that the facility will increase by 53% the amount of rentable studio space inside London.

Behind the project is film locations agency Location Collective, which secured a lease on an existing industrial depot and spend the ensuing months converting it into the large-scale, purpose-designed  filming facility, with the backing of Enfield Council.


“As with all existing film studios, the specification of OMA will evolve over time, but by July 2020 it will be fully equipped for the production of high calibre content for the next decade and beyond.”

“With the release this week of our Government and industry backed guidance to support the safe restart of film and high-end TV production, and with pre-existing sector strengths like generous tax credits and a world-class workforce, we anticipate more demand than ever for UK stage space in the coming months."