BBC One orders more of The Capture 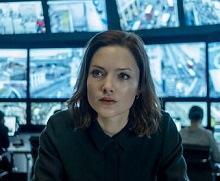 BBC One, Heyday Television and NBCUniversal International Studios’ surveillance thriller The Capture is set to return for a second series.

The 6 x 60 drama will be written and directed by Ben Chanan, with Kristian Dench producing.

Holliday Grainger will return as Rachel Carey for the second series. She said of the greenlight: “I’m excited to be joining Ben Chanan and the team for series two of The Capture. Ben’s meticulously researched world challenges the boundary between possible and probable dark truths and constantly keeps you guessing. I can’t wait to explore what he has in store for Rachel Carey next.”

Ben Chanan added: "I am thrilled to be joining forces with the BBC, Heyday and NBCUniversal International Studios again.

“The Capture series two will see Rachel Carey fall deeper into the dizzying world of fakery and disinformation. She has only just scratched the surface of this conspiracy."