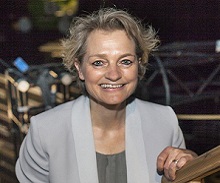 Francombe (pictured) is leaving the hub after ten years at the helm to join Bristol Old Vic Theatre School as its new principal/CEO; she takes up her new role in August.

Francombe founded The Bottle Yard Studios in 2010, in previously disused warehouses on a seven-acre site owned by Bristol City Council situated on the southern outskirts of Bristol.

This followed her lobbying of the council for support to retain production industries in the city, given the BBC’s 2009 decision to relocate production of dramas such as Casualty to Cardiff.

The council-owned studios are now established as one of the leading production facilities in the UK, with major domestic and inward investment projects setting up home there each year.

Producer and chair of the British Film Commission, Iain Smith, said: “After ten hard working years Fiona Francombe is moving from The Bottle Yard to challenges new. She will be sorely missed, as she alone was the sentinel who started the ‘impossible’ task of converting the facility from redundant bottling plant into the media centre it now is - the largest dedicated production space in the West of England.”

Francombe commented: “When Bristol City Council asked me to explore whether the site could be a viable alternative for studio space outside London, my verdict was yes; a stone’s throw from the diverse locations this part of the country offers, with an excellent established crew base, I believed that if we were resourceful, we could make it work. I was right.

“I have to say a huge and very heartfelt thank-you to my team at the Studios for their own commitment and dedication to making the Studios the success it is today, also to my colleagues in Bristol Film Office for their support and collaboration over the years.”

More than 60 projects have been produced at the studios over the last ten years, including Poldark, Broadchurch, The Trial of Christine Keeler, Fortitude, Wolf Hall, The Spanish Princess and Hellboy.