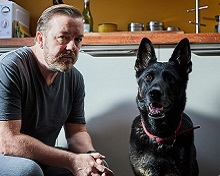 Netflix has confirmed that After Life will be returning for a third series.

The renewal of the comedy-drama, written by and starring Ricky Gervais, is part of a long-term deal that Gervais has signed with the streaming giant to write and produce scripted content and stand-up shows.

Set in the fictitious town of Tambury, the series centres on Gervais’ local-newspaper journalist Tony, struggling with grief after losing his wife Lisa to cancer.

"I was planning to retire soon and just wander around the house drunk until I die, but I’ve grown a bit tired of doing that during the lockdown, and also Netflix made me an offer I couldn’t refuse," Gervais said in a statement to The Hollywood Reporter.