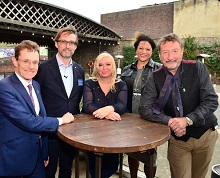 Create Central, the industry-led body set up in late 2019, has secured £2million of investment to deliver a programme of activities to help turbo charge the West Midlands film, TV and games sector.

Half the money will be delivered through the BFI’s National Cluster Growth Fund using National Lottery funds. The aim is to deliver a long-term growth plan specifically to meet the needs of the West Midlands’ screen businesses.

The rest is allocated as £500,000 investment from the West Midlands Combined Authority (WMCA) and £500,000 from Tin Smart Social, a regional social enterprise.

The investment will support the area’s local industrial strategy – a programme focused on the ‘future of media’.

Knight said of the news: “I joined Create Central to work with other business leaders from the screen sector to ensure that Birmingham and the wider region attracts new international production, supports homegrown talent and shouts about all the amazing things happening already in the West Midlands. This support from the BFI could not come at a better time for our industry.”

Isitt added: "In these extremely challenging times this is a very welcome and meaningful investment for our independent film, TV and games makers. Create Central has come up with an action plan based on our collective experience of working in the region with the aim of supporting film, TV and games production over the next two years and beyond.”

Mayor of the West Midlands, Andy Street, said: “This important BFI investment will help Create Central to deliver a dynamic programme of activities, especially at this challenging time for the screen sector.

“Create Central was established to improve the region’s film, TV and games industries, and this new funding will see it play a supportive role, focusing on boosting the resilience of the West Midlands screen industries and helping them to return to the growth they were generating prior to the coronavirus crisis.”