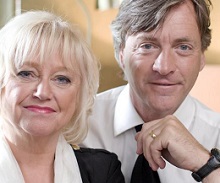 The fast-turnaround order, Richard & Judy: Keep Reading and Carry On, will see the couple revealing their favourite books and will air over one week from 4 May as 5 x 30 episodes, under C4’s Lockdown Academy banner.

Label1 is making the show, which will be shot from the pair’s home.

Finnigan said: “Books can transport you to incredible places from the comfort of your sofa and so there is no better time to share our top picks for lockdown reads and hear from viewers, celebrities and authors about the books that have helped them whilst staying at home.”

Richard and Judy: Keep Reading & Carry On is executive produced by Barnaby Coughlin, Simon Dickson and Lorraine Charker-Phillips for Label1; the series editor is Nicholas Steinberg.