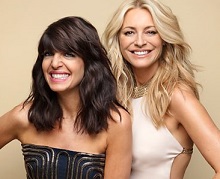 A series that pulls together some of the ‘best bits’ of Strictly Come Dancing’ has been ordered by BBC One.

The 3 x 60 will be hosted by regular presenters Tess Daly and Claudia Winkleman who will be joined from home by judges Craig Revel Horwood, Motsi Mabuse, Shirley Ballas and Bruno Tonioli.

Viewers will be able to send in home-made content of their reactions to some of their favourite Strictly routines, or try the dances out at home with the best clips included in the shows.

Kate Phillips, controller of BBC Entertainment, says: “Strictly Come Dancing has produced so many magical and memorable moments in the movie, musical and Blackpool weeks - the three special episodes will look back and celebrate these, bringing some much needed Strictly sparkle to the nation.”

The upcoming specials are set to air later this year on BBC One. Commissioned by Charlotte Moore, director of BBC content and Kate Phillips, Controller of BBC Entertainment; the specials will be executive produced by Sarah James for BBC Studios and commissioning editor Jo Wallace for the BBC.