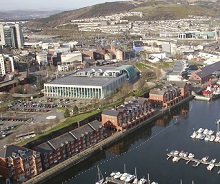 Swansea Council has taken temporary control of filming facility  Bay Studios to convert it into a field hospital.

The authority is working with contractors Kier and TRJ to transform the former factory and film studios into a space with 850 beds for the NHS.

The part of the complex being converted is the Elba Building which has been empty for years.


A kind of box will be constructed within the outer shell of the building, thought to date from the 1950s.

Rob Stewart, leader of Swansea Council, said: "We are facing unprecedented challenges in dealing with the spread of Coronavirus and the council is doing everything it can to support our communities.

"We are transforming the former Bay Studios into a surge hospital to help the NHS deal with the expected upsurge in the number of cases locally.

"This is a massive project because the building has been empty for years and it is a million miles away from what you would expect of a hospital.

"This will give the NHS 850 extra beds and our staff and contractors are working round the clock to make this happen. I am so grateful and proud of the huge efforts being made by so many people.

"We're grateful to the site's owner Roy Thomas for being so helpful with us in arranging for us to lease the building.”