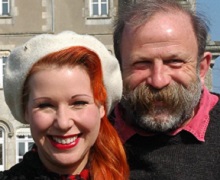 Channel 4 has commissioned a fast-turnaround series, Spring at Jimmy’s Farm, filmed by a small crew at Doherty’s Suffolk holding.

The four-parter is from Red Sky with Parky Productions, and will show viewers the full onset of spring over the 280-acre site, which includes an exotic animal park.

The episodes will cover wildlife, food, farming, gardening and science. Richard Park is the series editor, with Ross Harper and Jane Rogerson on board to executive produce.

Also urgently greenlit is another four-parter, a DIY and homecraft series from Dick and Angel Strawbridge.

Under the Lockdown Academy banner, Dick & Angel’s Make, Do & Mend (w/t) will see the pair offering tips and tricks for families looking for imaginative ways to solve their DIY problems using whatever they may have to hand.

The show will be filmed entirely by the Strawbridges at their French chateau, as they communicate online with UK viewers seeking advice.

Two Rivers Media is making the series in collaboration with the couple’s company, Chateau Television. LIzi Wootton exec produces for the former.

Alan Clements, managing director, Two Rivers, said: “This collaboration is a major move for us as a growing, ambitious indie. Dick and Angel are highly respected presenters and we are very excited to be working with them.

“Two Rivers’ ambition is to make programming which is creatively exciting and commercially successful. Dick and Angel’s Make, Do & Mend (w/t) is the first step in what we hope will be a long and successful relationship with Dick and Angel. We are already in advanced discussions about other projects beyond this initial commission.”