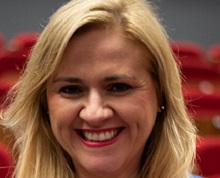 Professor Lyndsay Duthie is Head of School for Film, Media and Performing Arts, University for the Creative Arts with a 20-year background in the media industry, including as an executive producer/director for factual and entertainment content for BBC, ITV, C4, C5, Sky and Discovery.

Here she offers some insight into the industry - including the skills shortage facing the production industry.

From entry level to working on set

We began by asking Lyndsay if she thought there is enough trained, behind-the-camera talent to support the current production boom in the UK.

“Film, television and screen-based courses are still very popular in the UK, attracting thousands of applications year on year. Before they embark on their university/college courses many students already know about the roles of producer, director, but know less about some of the more technical roles or back-end structures that go into the business.

“How you encourage students to undertake these roles (from autocue to production accountants) can be a challenge, but they can lead to very rewarding careers or form a stepping stone to get to where they want to be.”

We then asked Lyndsay to specify some areas of production that are currently experiencing skills shortages.

“Production accounting is an area that has been highlighted as a skills shortage. I have previously worked with the Production Guild on an initiative to encourage students (particularly those interested in producing, production management) to consider this role and undertake specialist training with an intern placement.

“We debunked the notion that to be a production accountant you had to be a trained accountant.

Benefits and challenges of a career behind the camera

We wondered if there are any current trends in terms of the amount of young people applying to work in film and TV, with any perceived benefits or challenges accounting for the figures.

“We still see high numbers wanting to undertake degrees on film/tv/media courses and see notable success of careers forged in this field (my university UCA has 96.9% employability rate).

“That said, from previous ScreenSkills surveys we know that around the age of 35 more women than men leave the industry as family life/caring for elderly parents and sense of work/life balance can feel challenging.

“The industry is 75% freelance [which], coupled with long hours and low pay at the start of careers, can be a barrier. We try to give our graduates professional development training to help prepare them for this.”

The UK has a network of agencies such as ScreenSkills to support the creative industries. Are there enough and could they do more?

“I think agencies supporting the creative industries in the UK have improved over the last few years, with much more visibility and access points.

“They are leveraging social media platforms better to engage with those that previously may not have known about them and ironically are those that need the help the most.”

We were keen to get a glimpse into Lyndsay’s ideal future for the creative industries.

“It is incredibly exciting to have investment in new studio spaces such as Sky’s development at Elstree studios and Reading’s new multi-million pound studio development.

“The Netflix era has blurred the lines between film and television and the production values have been greatly raised across all genres.

“A challenge for content creators now is how to embed AI (artificial intelligence) and VR (virtual reality) into the narrative process, I don’t think we have scratched the surface here yet.

The Knowledge would like to thank Lyndsay Duthie for her time and expertise in compiling this article.