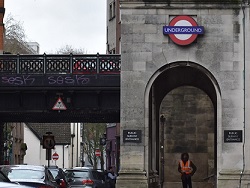 The Bristol leg of filming lasted three weeks with the city dressed as the capital.

The College Street and St George’s Street area was used for large-scale stunt sequences featuring a number of bodies strewn across the streets.

Natalie Moore of Bristol Film Office said of the shoot: “It was a pleasure to support Urban Myth Films for the production of War of the Worlds in Bristol last year.

“The company had previously used Bristol locations in 2016 for the making of Crazyhead, so it was a fantastic endorsement to welcome them back for this major international co-production, which saw Bristol become the backdrop for drama featuring a world-class cast and some exciting large-scale stunt scenes.”

War of the Worlds is produced by Urban Myth Films and is a Création Originale for Canal+ and Fox Network Group.