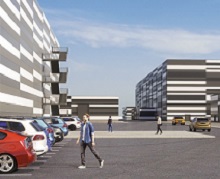 The proposed development, which aims to capitalise on Northern Ireland’s film-friendly reputation, will quadruple the size of the existing Belfast Harbour Film Studio complex.

The project represents an investment of £45m and will generate 250 construction jobs and support around 1,000 creative industry jobs.

SyFy’s Krypton was the first major production to utilise the facility over two series; it is now occupied by Robert Eggers’ Viking saga The Northman.

Under the proposed scheme, Belfast Harbour intends to develop four additional studios of 21,000 sq ft and two of 16,000 sq ft as well as up to 100,000 sq ft of production offices and 130,000 sq ft of support workshops on an adjoining 20-acre site. There will be backlots and support space for suppliers.

When combined with the existing site, the project will create the largest studio complex outside south-east  England.

Joe O’Neill, Belfast Harbour’s CEO, said: “In recent years Belfast has established itself as one of the UK’s top media production hubs. In 2017 we invested £20m to provide brand new studio facilities but with record levels of demand for studio space globally we are confident the time is right to progress with phase two of the development.”

Upon receipt of planning Belfast Harbour will start construction on phase two later this year with completion of the new studios scheduled for 2021.