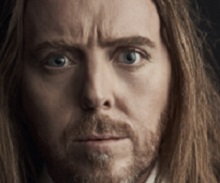 Filming is due to run from August-December this year; casting director Lucy Bevan is currently looking for a young girl to play the lead as well as children to play Matilda’s classmates.

The theatre iteration of Roald Dahl’s much-loved book opened in the West End in 2011 and currently holds the record – jointly with Hamilton – for the most Olivier awards won by a musical.

Tim Minchin (pictured) wrote the music for the show, which has a book by Dennis Kelly.

Minchin is on board as composer for the new film adaptation; Kelly will write the screenplay.