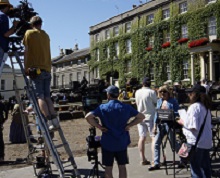 Suffolk's dedicated regional film office, Screen Suffolk, was set up in late 2016, a year in which there were just 20 filming days per year. That figure rose to 140 days last year.

Screen Suffolk, which manages 450 locations across the county, estimates that around £11,500 per filming day is generated for the local economy – equating to a spend of £1.6m in 2019.

Period feature The Dig starring Ralph Fiennes and Carey Mulligan also filmed extensively in the area to tell the story of the famous Sutton Hoo archaeological excavation. The production team used Suffolk locations including Butley and Thorpeness, and set up a production base at Snape Maltings.

The Wildman of Orford shoot on Aldeburgh beach

Rachel Aldridge, operations and business development manager for Screen Suffolk, said: “Each separate borough and district has something unique to offer. In west Suffolk we have historic Bury St Edmunds, mid Suffolk has one of the most picturesque villages in the UK - medieval Lavenham - east Suffolk has fabulous beaches and Ipswich has dramatic cityscapes and the docks. You can find everything you need for your film, tv show or photo shoot here.”

Jim Horsfield, also operations and business development manager, commented: “The foresight of all the council’s coming together to setup a film office is now paying dividends to our local economy.

"We have seen an increase in the locations available, bringing in more productions which then gives opportunities and boosts skills for talented cast and crew.”