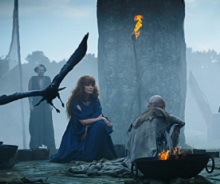 The pair also exec produce with Neal Street’s Sam Mendes, Pippa Harris and Nicolas Brown, and James Richardson for Vertigo. Gabriel Silver is the exec producer for Sky; Rupert Ryle-Hodges is the producer.

The third series will focus on Cait (played by Eleanor Worthington-Cox), the Chosen One who faces a decision that will tie her to the future of her war-torn people and their ravaged land.

Jez Butterworth said: “We’re very excited to be continuing our mythic journey through Ancient Britain. This year was a particularly good vintage for mushrooms here in the West Country, so we strongly suggest you hold on to your hats.”

PI subscribers can log into the site for details on Britannia, including the shoot dates and key production hires.

The eleventh series of Vera has also been greenlit from ITV Studios and Silverprint Pictures. Brenda Blethyn stars as the eponymous Northumberland detective in the adaptation of the novels by Ann Cleeves. The executive producers are Phil Hunter and Kate Bartlett.

Operation Mincemeat to film in December

A new WWII film starring Colin Firth will film in London from December.