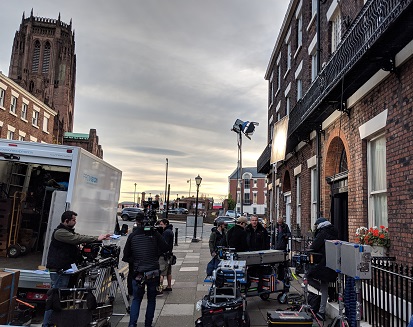 2019 was a bumper year for Liverpool as the city racked up a total of 1,750 production days, according to stats from the Liverpool Film Office.

The resulting boost to the local economy stands at £17.6m, an increase of £1.5m on last year’s revenue.

Liverpool hosted a swathe of high-end TV dramas during 2019, including Sky Atlantic’s Tin Star, Sky One’s COBRA, Amazon’s The Feed, Netflix’s The Crown, The Irregulars and The English Game, and World on Fire and Years and Years for the BBC.

Tin Star executive producer Alison Jackson said: “Filming in Liverpool has been a fantastic experience, the location has been pivotal for our characters who return to face their troubled past in an all-new and surprising environment for the viewer.

“Liverpool City Region provided us with a wealth of cinematic locations, and the support we received from Liverpool Film Office and the people of this city has been instrumental in creating our explosive third series.”

Liverpool has long been considered a film-friendly location, partly because the grand civic architecture doubles easily for other cities, including New York (as in Das Boot), Madrid (in Years and Years) and London (The Irregulars).

The purple patch was confirmed as the film office, currently marking its 30th anniversary, recently launched the Liverpool City Region Production Fund with CBBC’s The Snow Spider the first to receive support.

The city will also soon have a dedicated film studio as the iconic art deco building that formerly housed Littlewoods Pools is set to become a major production facility.

The building itself comprises 180,000 sq ft and there is an adjacent six-acre site on Edge Lane. Twickenham Studios will be the facility's first anchor tenant.