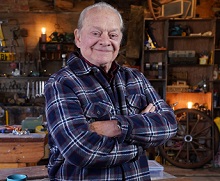 The four x 60 project will see the actor – who is a qualified pilot and former mechanic - indulge his life-long interest in engineering and mechanics as he investigates various innovations, the people behind them and how they came about.

Inventions set to be covered in the series include the jet engine, the hovercraft, the light bulb and the tanks of World War One.

Jason said of the series: “From the jet engine and the hovercraft to the telephone and the tank - they’re all fascinating pieces of technology it’s hard to imagine our world without.

“They were all invented right here in the UK – showing we’ve always been a nation with real pioneering spirit."

Wise Owl Films’ creative director and executive producer Mark Robinson added: “Wise Owl Films was born in autumn 2018 just as it was announced that Channel Four were moving its HQ to Leeds, so we’re absolutely delighted to now announce our first commission for More4/Channel 4.

“This is an exciting time to be making shows out of Yorkshire – and we’re delighted to have gone on this particular journey with the UK’s most-loved actor, showing a personal passion of Sir David’s that viewers might not be aware of.”

UKTV has ordered another series of Sliced for its comedy channel Dave.