Leeds Studios to open May 2020 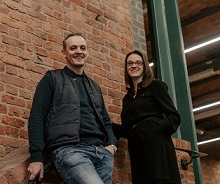 All Studios has confirmed that a new production facility will open in the centre of Leeds next May. Leeds Studios will be a full-service complex with five stages for film, TV and commercials production.

The facility is based at Whitehall Road and will comprise more than 130,000 sq ft of production space; two of the five sound stages can be combined to make one larger one.

60,000 sq ft of the site will house production offices and service space, including prop stores, workshops, make-up and costume facilities.

Leeds Studios is a joint venture between All Studios, operators of the Manchester Studios complex (formerly Granada/ITV studios in the city), led by Melanie Jones, and Ben Hepworth, managing director of Leeds-based Prime Studios (both pictured). The project has support from Leeds City Council.

Hepworth said: ‘'Leeds Studios will act as a gateway to Yorkshire’s wealth of unique and historic filming locations and will cement Leeds city region's growing status as a leading international destination for film & TV production.’’

Jones added: ‘’The launch of Leeds Studios is a significant development in our strategy to build a market leading portfolio of film & TV production spaces across the UK.’’

Leeds is the fastest-growing city in the UK and recently strengthened its screen-sector-friendly profile with the announcement that Channel 4 would be opening a major HQ there.