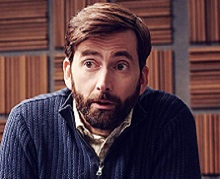 Filming begins on the 8 x 60 in February, largely in South Africa and Romania, with Simon Crawford Collins exec producing for the UK’s Slim Film + Television, alongside Lionel Uzan and Pascal Breton for Federation in Paris.

Ashley Pharoah and Caleb Ranson have written the drama with Steve Barron in place as lead director; Charles Beeson will also direct a number of episodes.

Crawford Collins said: “We are thrilled to have such a talent as David to play this modern take on the iconic role of Phileas Fogg. Bigger than the hair-raising physical challenges of the adventure – from the scorching heat of the desert to skulduggery in Hong Kong and of course strikes in Paris – will be Fogg’s personal journey.”

Nathalie Biancolli, EVP international scripted, France Télévisions, commented; “The Alliance is proud to work alongside European talents to develop such an exceptional adventure series around this major work of literature. Created in 2018 by France Televisions (France), RAI (Italy) and ZDF (Germany), The Alliance is a strategic production laboratory for public service broadcasters.

“The European Alliance reinforces an original and diversified creative strategy that promotes cultural diversity and European talent through ambitious high-end productions, which broaden the field of TV fiction and aim at international markets."

Around the World in 80 Days is a Slim Film + Television and Federation co-production with additional co-production partners, Palladium Pictures in South Africa, and Daro Film, associate producer.

Sitting in Limbo gears up for filming

BBC One feature-length drama Sitting in Limbo is gearing up to film towards the end of November.

The Pinewood Group has confirmed that it has served notice to end its agreement for the studio in Cardiff with effect from next spring.